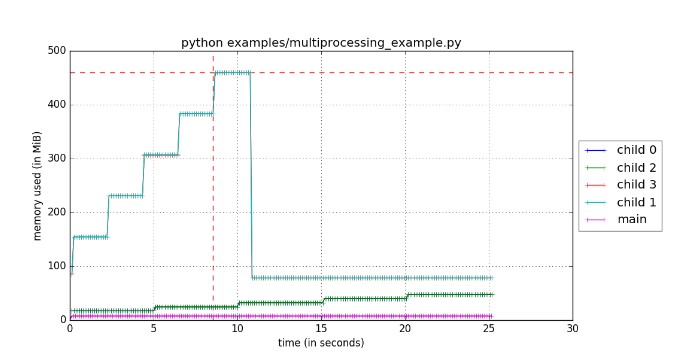 The package is also available on conda-forge.

To install from source, download the package, extract and type:

The line-by-line memory usage mode is used much in the same way of the line_profiler: first decorate the function you would like to profile with @profile and then run the script with a special script (in this case with specific arguments to the Python interpreter).

In the following example, we create a simple function my_func that allocates lists a, b and then deletes b:

Execute the code passing the option -m memory_profiler to the python interpreter to load the memory_profiler module and print to stdout the line-by-line analysis. If the file name was example.py, this would result in:

A function decorator is also available. Use as follows:

In this case the script can be run without specifying -m memory_profiler in the command line.

In function decorator, you can specify the precision as an argument to the decorator function. Use as follows:

If a python script with decorator @profile is called using -m memory_profiler in the command line, the precision parameter is ignored.

Sometimes it is useful to have full memory usage reports as a function of time (not line-by-line) of external processes (be it Python scripts or not). In this case the executable mprof might be useful. Use it like:

The first line run the executable and record memory usage along time, in a file written in the current directory. Once it’s done, a graph plot can be obtained using the second line. The recorded file contains a timestamps, that allows for several profiles to be kept at the same time.

Help on each mprof subcommand can be obtained with the -h flag, e.g. mprof run -h.

In the case of a Python script, using the previous command does not give you any information on which function is executed at a given time. Depending on the case, it can be difficult to identify the part of the code that is causing the highest memory usage.

will record timestamps when entering/leaving the profiled function. Running

afterward will plot the result, making plots (using matplotlib) similar to these:

or, with mprof plot --flame (the function and timestamp names will appear on hover): 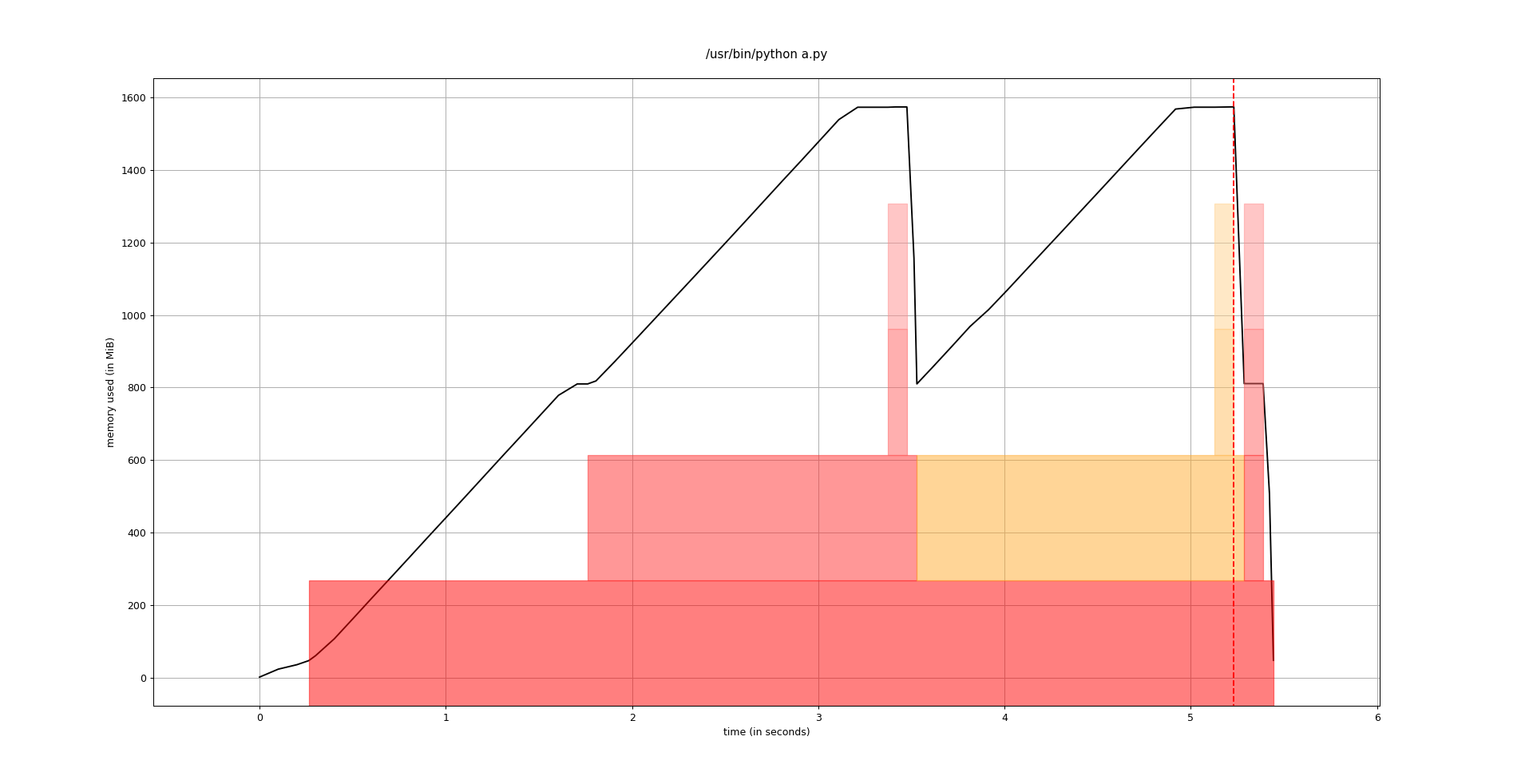 A discussion of these capabilities can be found here.

If your Python file imports the memory profiler from memory_profiler import profile these timestamps will not be recorded. Comment out the import, leave your functions decorated, and re-run.

The available commands for mprof are:

In a multiprocessing context the main process will spawn child processes whose system resources are allocated separately from the parent process. This can lead to an inaccurate report of memory usage since by default only the parent process is being tracked. The mprof utility provides two mechanisms to track the usage of child processes: sum the memory of all children to the parent’s usage and track each child individual.

To create a report that combines memory usage of all the children and the parent, use the include_children flag in either the profile decorator or as a command line argument to mprof:

The second method tracks each child independently of the main process, serializing child rows by index to the output stream. Use the multiprocess flag and plot as follows:

This will create a plot using matplotlib similar to this:

You can combine both the include_children and multiprocess flags to show the total memory of the program as well as each child individually. If using the API directly, note that the return from memory_usage will include the child memory in a nested list along with the main process memory.

By default, the command line call is set as the graph title. If you wish to customize it, you can use the -t option to manually set the figure title.

You can also hide the function timestamps using the n flag, such as

Trend lines and its numeric slope can be plotted using the s flag, such as

The intended usage of the -s switch is to check the labels' numerical slope over a significant time period for :

The trend lines are for ilustrative purposes and are plotted as (very) small dashed lines.

It is possible to set breakpoints depending on the amount of memory used. That is, you can specify a threshold and as soon as the program uses more memory than what is specified in the threshold it will stop execution and run into the pdb debugger. To use it, you will have to decorate the function as done in the previous section with @profile and then run your script with the option -m memory_profiler --pdb-mmem=X, where X is a number representing the memory threshold in MB. For example:

will run my_script.py and step into the pdb debugger as soon as the code uses more than 100 MB in the decorated function.

memory_profiler exposes a number of functions to be used in third-party code.

memory_usage(proc=-1, interval=.1, timeout=None) returns the memory usage over a time interval. The first argument, proc represents what should be monitored. This can either be the PID of a process (not necessarily a Python program), a string containing some python code to be evaluated or a tuple (f, args, kw) containing a function and its arguments to be evaluated as f(*args, **kw). For example,

Here I’ve told memory_profiler to get the memory consumption of the current process over a period of 1 second with a time interval of 0.2 seconds. As PID I’ve given it -1, which is a special number (PIDs are usually positive) that means current process, that is, I’m getting the memory usage of the current Python interpreter. Thus I’m getting around 7MB of memory usage from a plain python interpreter. If I try the same thing on IPython (console) I get 29MB, and if I try the same thing on the IPython notebook it scales up to 44MB.

If you’d like to get the memory consumption of a Python function, then you should specify the function and its arguments in the tuple (f, args, kw). For example:

This will execute the code f(1, n=int(1e6)) and return the memory consumption during this execution.

Sometime it would be very convenient to use logger module specially when we need to use RotatingFileHandler.

The output can be redirected to logger module by simply making use of LogFile of memory profiler module.

Sending everything to the log file while running the memory_profiler could be cumbersome and one can choose only entries with increments by passing True to reportIncrementFlag, where reportIncrementFlag is a parameter to LogFile class of memory profiler module.

For IPython 0.11+, you can use the module directly as an extension, with %load_ext memory_profiler

To activate it whenever you start IPython, edit the configuration file for your IPython profile, ~/.ipython/profile_default/ipython_config.py, to register the extension like this (If you already have other extensions, just add this one to the list):

It then can be used directly from IPython to obtain a line-by-line report using the %mprun or %%mprun magic command. In this case, you can skip the @profile decorator and instead use the -f parameter, like this. Note however that function my_func must be defined in a file (cannot have been defined interactively in the Python interpreter):

or in cell mode:

Another useful magic that we define is %memit, which is analogous to %timeit. It can be used as follows:

or in cell mode (with setup code):

For more details, see the docstrings of the magics.

For IPython 0.10, you can install it by editing the IPython configuration file ~/.ipython/ipy_user_conf.py to add the following lines: